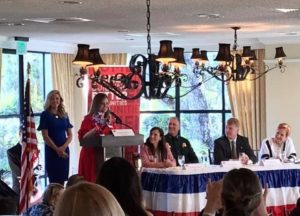 Over the years, SPAC has weighed in on various topics, including child safety seats, bicycle helmets for children under 16, the Environmental Growth Management Act of 1995, the ‘911’ Emergency Medical System, and numerous other legislation relating to child abuse, domestic violence, juvenile justice, education, healthy foods and human trafficking. Britt Riner served as the 2018-19 Current Affairs chair and worked to codify JLS SPAC events so they could be replicated across the state. Committee members equipped themselves with legislative knowledge at FL SPAC Summer Conference in Miami. In July 2018, the SPAC committee received training on the legislative process with 60 other women from around the state.

In September 2018, SPAC co-chairs mailed letters to all 40+ elected officials serving Sarasota County, explaining the history of the Junior League and our local impact as well as what SPAC is. This was an effort to expand the brand of the League, as well as to open the door to future partnerships. We received warm responses, including officials interested in learning more and a personal letter from them County Commission Chair Nancy Detert expressing her appreciation for the League’s work.

On October 20, 2018 SPAC hosted a ballot training for League members and their guests. Supervisor of Elections Ron Turner keynoted the day with election statistics and SPAC committee members followed with pro/con arguments they researched for each of the amendments on the November 2018 ballot. Attendees took copious notes, and the offering was so positively received that two other sessions were held during lunch and after work hours at headquarters. All attendees surveyed reported that this was a good use of their time and that they gained new knowledge. Several changed how they planned to vote and many said that they became the go-to voting resource in their family. We witnessed the multiplier effect in full force.

As a result of this event, JLS SPAC won the JL FL SPAC Community Impact Award at the Inaugural Leading Ladies Luncheon in Tallahassee in January. This luncheon was keynoted by then Lieutenant Governor-elect Nunez. Accepting the award on behalf of JLS were President Amy Sankes and SPAC committee member and State Representative Margaret Good. Amy remarked, “Core to our mission as Junior Leaguers is training volunteers to strengthen our communities. We do this by first strengthening our women. Our SPAC believes that good government begins with strong citizenry, and what better way than to equip our women with the tools to make the best decisions they can at the ballot box? As you know, this past November’s election was a historic one — both given the length of the ballot and the role the Constitutional Revision Commission played.” She closed with thanking JL FL SPAC for “recognizing the visioneering talent and impeccable execution of my SPAC team.”

Kicking off in the fall, SPAC launched a new monthly series called “Policy and Practice Lunches.” This year’s theme was how JLS members put policy into practice through their work and civic engagements. We gathered at JLS HQ and enjoyed an informal bring-your-own lunch hour together in which the speaker shared remarks and then Q&A ensued. More than 50 different attendees joined us throughout the year. A common refrain from our speakers was that their Junior League experience prepared them to pursue even greater pathways of public service. Another fascinating element our speakers shared in common: they all had either served on SPAC or as JLS Presidents – or both!
The Honorable Judge Andrea McHugh, discussing her work with the Turn Your Life Around Court, a prostitution and trafficking diversion court
Donna Barcomb, Charter Review Board Member and Former Hospital Board member discussing her experiences running for office
The Honorable Judge Rochelle Curley, discussing her her work presiding over the Juvenile/Dependency Court in which delinquent crimes are evaluated and the guardianship and home of children in foster care is determined
Amanda Gambert, Former Assistant State Attorney Felony Division Chief, discussing her work prosecuting crimes against children
Wendy Hopkins, Former VP of Community Foundation of Sarasota County discussing her work activating local citizens and philanthropy in service to important causes.
The first lunch in the current league year welcomed Heather Todd, Executive Director of Teen Court, and Katy McBeyer, Teen Court Board Vice Chair, who gave us a brief overview of the history of Teen Court and a snapshot of the current program. Teen Court was started in 1986 as a joint effort between Junior League of Sarasota and the League of Women Voters.

On January 25, 2019 SPAC hosted a sold-out Legislative Breakfast at The Field Club. SPAC invited all locally elected officials to attend and asked select officials to serve as panelists to respond to questions offered in advance by League members and moderated by respected attorney Morgan Bentley. More than 20 officials attended along with more than 120 new, active, and sustaining Junior League members and their guests to hear from four panelists. Those panelists included Representative Margaret Good, Sheriff Tom Knight, County Commissioner Chairman Charles Hines, and School Board Chairwoman Jane Goodwin. Members submitted questions in advance for panelists to consider. Panelists shared stories recounting their most embarrassing moment on the campaign trail to their most cherished story impacting the lives of a citizen. They each commented on a variety of topics such as the Marjory Stoneman Douglas Act, the Opioid Crisis, and red tide from the perspective of their position, providing a unique lens through which to view each of these societal challenges.

Please join us at The SPAC Annual Breakfast on April 8, 2022 at the Sarasota Yacht Club. This is an educational session for Active and Sustainer Members and their guests, where local elected officials will be invited to attend.

All donations to The Junior League of Sarasota fund our Mission; promoting voluntarism, developing the potential of women, and improving communities through effective action and leadership of trained volunteers.

The Junior League of Sarasota provides several opportunities to invest in our mission including charitable gifts, featured events to attend, and merchandise from our Simply Sarasota line.

Thank you to the following Community Impact Sponsors for our 2020-2021 League Year:

By continuing to use the site, you agree to the use of cookies. more information